The Cinema of Andrzej Wajda: The Art of Irony and Defiance 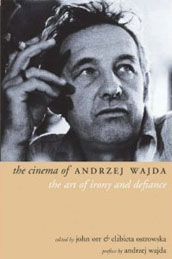 Includes: Foreword by Andrzej Wajda
Article by John Orr: At the Crossroads: Irony and Defiance in the Films of Andrzej Wajda

A major reassessment of the great Polish director Andrzej Wajda, who received a Lifetime Achievement Academy Award in 2000, this collection covers all aspects of his work. From the early trilogy of the 1950s – A Generation, Kanal, Ashes and Diamonds –to the 1999 epic Pan Tadeusz, the contributors consider Wajda’s daring innovations in style, his concern with Polish history and nationhood, and his artistic defiance of authoritarian rule during the Cold War, particularly in such films as Man of Marble and Man of Iron. It is thus a wide-ranging examination of a prolific film-maker whose work over four decades reflects the changing nature of cinema itself.

The most comprehensive and multifaceted compilation on Andrzej Wajda published in English...A desideratum for anyone drawn to Wajda’s films or Polish cinema in general. Renata Murawska, Macquarie University
The significance and importance of John Orr’s writing on Polish cinema results from his general critical strategy, present in all his books and essays. He never isolated Polish, or more broadly, Eastern European film-makers from the rest of world cinema... This broad conceptual framework allowed him to perceive those aspects of Polish film-making that are often overlooked in critical writing focused on its political and cultural dimension. If post-1989 Poland had, and still has, to make efforts to ‘return to Europe’, in John’s writing Polish cinemas has always been there. Elzbieta Ostrowska, Obituary, Studies in Eastern European Cinema, Volume 2 Number 1