The Art and Politics of Film 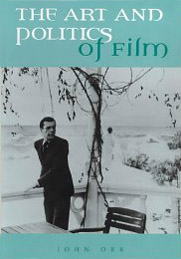 The third of three books (Cinema and Modernity, Contemporary Cinema, and The Art and Politics of Film) which were perceived by John Orr as a trilogy that in the words of his colleague and friend Duncan Petrie:
‘...collectively comprise the heart of John’s forensic dissection of the artistic and social significance of modern cinema and the achievements of its most accomplished directors: Cinema and Modernity published in 1993, followed by Contemporary Cinema in 1998 and The Art and Politics of Film in 2000. Rejecting the prevailing intellectual orthodoxy in Anglophone film studies, a terrain dominated by semiotics, structuralism and post-structuralism, and by the influence of Althusser, Lacan, Barthes and Derrida, John’s touchstones were Sartre, Nietzsche and Freud, and he drew upon their insights to interrogate the ways in which the great European and American auteurs engaged with the conflicts and contradictions of modern society; investigated the formation and role of the contemporary subject, and pushed the boundaries of film form and aesthetic productivity. Returning time and time again to core themes of power and politics; identity, subjectivity and the unconscious; desire and the gaze; the uncanny and the double; the machinations of the commodity culture, John’s critical approach continually sheds invaluable new light on the familiar films and film-makers, revealing new layers of artistic achievement, social significance and deep underlying connections in the process.’

The Art and Politics of Film is the final part of a critical trilogy that explores cinema in the latter half of the twentieth century. It fuses analysis of objective form in Cinema and Modernity with a subsequent critique of subjective form in Contemporary Cinema, and reassesses the close ties of the aesthetic and the political right up to the present time.

Film not only engages the question of power. Its narratives also dissect the conflicts between public and personal identity in a changing world. Different filmmakers take on different dimensions of this universal theme. The book examines the cinematic city in Kieslowski and Cronenberg; the cinema of wonder in Tarkovsky and Angelopoulos; the hyper-modern world of science fiction and horror; the time-image in Resnais, Rivette, Lynch and Stone; and the art of identity in Jarman and Jordan. At the turn of the century, film is seen as a component of a hyper-modern culture, which has displaced the modernist aesthetic of the 1960s, and now plays a key role in our mapping of the information age.

Orr gives us an entirely original and invaluable new 'cut' or montage of the last 50 years of auteur filmmaking, the divergent aesthetics within the Hyper-Modern in (largely) Western cinema and its disjunction from the anomalous road taken by the Meta-Modern artists in the East...Orr is as much at home with Terminator 2 and Copycat as he is with Egoyan, Wong or Wenders. …Throughout the book Orr's apercus are incisive. When it comes to the Meta-Modern Cinema of Wonder, Orr's hymn to the film-worlds of Angelopolous, Paradjanov and Tarkovsky, most notably his insights regarding the combination of lives viewed at their maximum level of intensity yet within a culture of extreme detachment from the ambient Modern world, is note-perfect.
Film West: Ireland’s Film Quarterly