The Demons Of Modernity: Ingmar Bergman and European Cinema 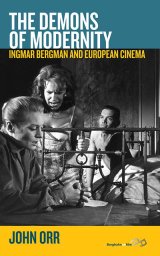 Berghahn Books 2014
On the evidence of this brilliantly allusive study of Ingmar Bergman, John Orr, had it not been for his premature passing, would have become one of the world's most influential of film analysts. Even beneath the shadow of the plethora of books on Bergman, Orr's approach is distinctive… He emphasizes the maestro's courageous leap into Modernism in the early 1960's, and the profound influence he exerted on his contemporaries. It is a pleasure to read Orr's elegant prose, which eschews the obtuse terminology of semiotics in favor of a lucid, almost passionate approach to the material. Bergman, one feels, would have enjoyed this book.
Peter Cowie, author of Ingmar Bergman, A Critical Biography

The Demons of Modernity hits the ground running. We travel around the sociology, aesthetics and demonology of Ingmar Bergman with John Orr's great speed of thought and agility. The book is bracing, challenging, beautifully judged, fair minded, unstinting, and exhilarating.
Mark Cousins, filmmaker and director of The Story of Film: An Odyssey

Ingmar Bergman’s films had a very broad and rich relationship with the rest of European cinema, contrary to the myth that Bergman was a peripheral figure, culturally and aesthetically isolated from the rest of Europe. This book contends that he should be put at the very center of European film history by chronologically comparing Bergman’s relationship to key European directors such as Carl Theodor Dreyer, Jean-Luc Godard, Michelangelo Antonioni, and Andrei Tarkovsky, and also looks at Bergman’s critical relationship to key movements in film history such as the French New Wave. In so doing, it demonstrates how Ingmar Bergman’s films illustrate the demonic struggle in modernity between faith and secularity through “his intense preoccupation with the malaise of intimacy.

See this book at Berghahn Books