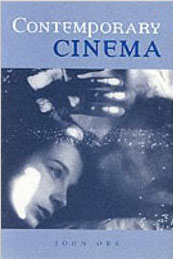 The second of three books (Cinema and Modernity, Contemporary Cinema, and The Art and Politics of Film) which were perceived by John Orr as a trilogy that in the words of his colleague and friend Duncan Petrie:
‘...collectively comprise the heart of John’s forensic dissection of the artistic and social significance of modern cinema and the achievements of its most accomplished directors: Cinema and Modernity published in 1993, followed by Contemporary Cinema in 1998 and The Art and Politics of Film in 2000. Rejecting the prevailing intellectual orthodoxy in Anglophone film studies, a terrain dominated by semiotics, structuralism and post-structuralism, and by the influence of Althusser, Lacan, Barthes and Derrida, John’s touchstones were Sartre, Nietzsche and Freud, and he drew upon their insights to interrogate the ways in which the great European and American auteurs engaged with the conflicts and contradictions of modern society; investigated the formation and role of the contemporary subject, and pushed the boundaries of film form and aesthetic productivity. Returning time and time again to core themes of power and politics; identity, subjectivity and the unconscious; desire and the gaze; the uncanny and the double; the machinations of the commodity culture, John’s critical approach continually sheds invaluable new light on the familiar films and film-makers, revealing new layers of artistic achievement, social significance and deep underlying connections in the process.’

The second part of a critical trilogy, Contemporary Cinema is a major study of key developments in the cinema over the last thirty years. It reworks Pasolini's landmark concept of 'the cinema of poetry' to look at the transformation of film form in its encounter with society, the sacred, the subjective and the presence of the camera. Poetic cinemas are seen as creating a distincitive match in their own cultures between critical social engagement and the delirium of form. In the 1970s, the influential forms of a cinema of poetry are analysed in key features by Altman, Herzog, Malick, Scorsese, Weir, Von Trotta and Tarkovsky while in the 1980s and 1990s the emergence of new filmmakers has meant a diffusion of different cinemas of poetry using new techniques and new technologies. Of key importance here is the work of Kieslowski, Lynch, Egoyan, Campion, Greenaway, Zhang Yimou, Tran Anh Hung and Wong Kar-Wai, as well as the reinvention of science fiction and film noir in American genre. These multiple cinemas of poetry with their social commitment and stylistic delirium have created a new freshness, vitality and visual impact to outrival the mainstream genre products of the Hollywood studies which currently dominate the world.