Romantics and Modernists in British Cinema 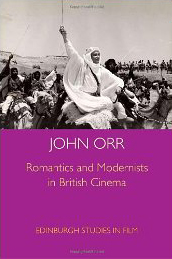 John Orr focuses on the transition from the classical to the modern period in British cinema and discusses contemporary trends in British filmmaking. He contextualizes historical approaches to the study of the genre and offers fresh perspectives on its debates and controversies. Covering a broad selection of films, filmmakers, and topics, Orr interrogates the major traditions that have shaped British cinema history and brings an awareness of formal and cultural influences on British cinematic creativity.

John Orr's book gives the most ambitious single-author overview of British cinema since Raymond Durgnat's ground-breaking A Mirror for England 40 years ago… Anyone interested in the riches of Britain's film history will gain from reading it.
Charles Barr, Emeritus Professor, University of East Anglia

...when Orr is writing about the cinema he clearly loves most (Hitchcock, Reed, Douglas, Davies, McQueen) his own fusing of modernism and romanticism comes to the fore – clear, cogent analysis with an underlying lyricism that inspires an imaginative passion in the reader.
Nick James, Sight & Sound, August 2010

Romantics and Modernists, retains Orr's characteristic pith and insight. What is more, with unconventional heroism it utterly dispenses with the all the notes, references, quotes and secondary evidences which buttress and clutter many a lesser tome. This is all Orr, crammed with provocative opinion and imaginative flight. It is a gem-like swansong.
Andrew Moor, Journal of British Cinema and Television