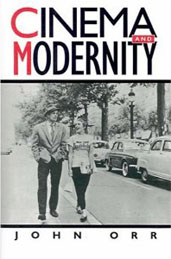 The first of three books (The Art and Politics of Film, Contemporary Cinema, and Cinema and Modernity) which were perceived by John Orr as a trilogy that in the words of his colleague and friend Duncan Petrie:
‘...collectively comprise the heart of John’s forensic dissection of the artistic and social significance of modern cinema and the achievements of its most accomplished directors: Cinema and Modernity published in 1993, followed by Contemporary Cinema in 1998 and The Art and Politics of Film in 2000. Rejecting the prevailing intellectual orthodoxy in Anglophone film studies, a terrain dominated by semiotics, structuralism and post-structuralism, and by the influence of Althusser, Lacan, Barthes and Derrida, John’s touchstones were Sartre, Nietzsche and Freud, and he drew upon their insights to interrogate the ways in which the great European and American auteurs engaged with the conflicts and contradictions of modern society; investigated the formation and role of the contemporary subject, and pushed the boundaries of film form and aesthetic productivity. Returning time and time again to core themes of power and politics; identity, subjectivity and the unconscious; desire and the gaze; the uncanny and the double; the machinations of the commodity culture, John’s critical approach continually sheds invaluable new light on the familiar films and film-makers, revealing new layers of artistic achievement, social significance and deep underlying connections in the process.’

This book, the first in a critical trilogy on contemporary cinema, discusses the complex relation between modernity and cinema drawing particularly upon the European and American cinema during the second half of the twentieth century. John Orr attempts to rethink the relation of film-making to the contemporary world challenging many of the critical complacencies of post-modernism and offering a fresh perspective upon the development of the modern cinema.

The most refreshing aspect about this very readable book is its perspective. The author discusses a wide range of European and American films, including a number of contemporary titles, in the light of the major cultural and political forces which have shaped Western industrial society this century. Provocative, challenging. Recommended.
Media Information Australia

See this book at Polity