The Cinema of Roman Polanski: Dark Spaces of the World 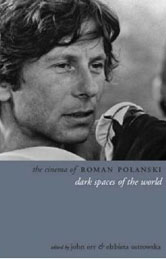 Includes article by John Orr: Polanski: The Art of Perceiving

Roman Polanski is a great maverick figure of world cinema who has lived a controversial and tragic life. Yet his notoriety has eclipsed the true importance of his long career, starting with his short films in the 1950s and continuing through to the recent Oliver Twist (2005). This collection highlights the bold and dazzling diversity of his work as well as recurrent themes and obsessions. Films discussed include Knife in the Water (1962), Repulsion (1965), Rosemary's Baby (1968), Chinatown (1974), Death and the Maiden (1994), and The Pianist (2002).
This thorough, engaging and accessible volume casts critical light on a director who resists easy interpretation. These essays approach Polanski from a wide range of perspectives, and suggest provocative connections between seemingly disparate works; the writers point to the larger issues at the heart of his oeuvre: perception, space, desire, national identity, memory and the fluid reinterpretation of genre. These nuanced readings of individual films work to simultaneously situate Polanski within a broader theoretical context.
Amy Herzog, Queens’s College, CUNY

An anthology that casts light not only on the darkness of vision, but also on the disparate perspectives with which the films of Polanski have been associated. Distinctive voices map out the cinema of a truly transnational director from a variety of approaches: auteur theory, genre, psychoanalysis, feminism as well as national cinema and trauma studies...A timely and essential work in understanding Polanski’s contribution to why cinema was invented.
Luisa Rivi, University of Southern California, Los Angeles