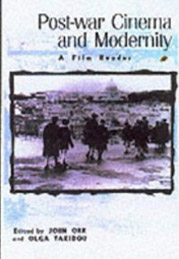 Includes article by John Orr: A Cinema of Poetry

Post-war Cinema and Modernity explores the relationship between film and modernity in the second half of the twentieth century. Its distinguishing feature is the focus on the close connections between history, theory and textual criticism.

The first section, on Film Theory and Film Form, begins with a sustained group of theory readings. Bazin and Telotte critique new post-war forms of film narrative, while Metz and Birch respond to the filmic innovations of the 1960s and the question of modernism. Pasolini's landmark polemic on the cinema of poetry is a vital springboard for the later critiques by Deleuze and Tarkovsky of time and the image, and for Kawin and De Lauretis of subjectivities and their narrative transformation, while Jameson deals with the topical question of film and postmodernity. There follows a series of essays grouped around different aspects of film form. General discussion of changes in film technology and cinematic perception can be seen in the essays by Virilio, Wollen, Aumont and Bukatman, and is extended to a discussion of film documentary. Finally, there is a focus on cinematographers and their filmic collaboration, with a specially commissioned essay on post-war British cinematography, and readings featuring the work of Michael Chapman with Martin Scorsese and Nestor Almendros with Terrence Malick.

The second section looks at International Cinema, placing filmmaking and filmmakers in a social and a national context, as well as taking up many aspects of film theory. It brings together landmark essays which contextualise feature films historically, yet also highlight their aesthetic power and their wider cultural importance. Filmmakers discussed include Ozu, Bresson, Hitchcock, Godard, Fassbinder and Zhang Yimou. There is a new translation of Kieslowski's essay on Bergman's The Silence and an essay specially commissioned for the volume on the work of Theo Angelopoulos.

The editors have chosen to focus significantly on Italian Neo-Ralism, Anglo-American Neo-Expressionism, and Japanese Formalism, and the collection is a heady potpourri of polemic and practice, surface and section. Among the writers are thinkers – Bazin, Pasolini, Metz, Sontag – and filmmakers – Godard, Tarkovsky, Bergman, Angeloupoulos.. Included here are searching and cogent readings of films...
Richard Armstrong, Sense of Cinema

That film criticism, for Orr, is a melting pot of aesthetics, ontology, history and more, points to a legacy of tools and perspectives which is becoming as rich as the domain of domestic moving image consumption itself...Keep Orr and Taxidou near the VCR for it enables you to pick and compare theories and readings of films as assiduously as we pick and mix our viewing experiences.
Source n/a